“I use a library the same way I’ve been describing the creative process as a writer — I don’t go in with lists of things to read, I go in blindly and reach up on shelves and take down books and open them and fall in love immediately. And if I don’t fall in love that quickly, shut the book, back on the shelf, find another book, and fall in love with it. You can only go with loves in this life.”
– Ray Bradbury

For those writers keen to design their own book covers, I wanted to share some graphic design tips that no one else has ever told them. Yes, it is once again burdened unto me to educate the world on something that no one else is aware of and I and I alone must rescue the teeming masses from their ignorance. Hey, it’s a thankless job, but someone has to waste their lifetime making the lemmings notice the cliff. Still standing in the rye like Holden Caulfield, waiting to catch them.

The tip is simply this – stop ignoring the rules of medieval heraldry! Be sure to follow that shit!

No, that’s not a joke. I’m completely serious. Most designers don’t know anything about the rules of medieval heraldry because they don’t teach that in basic design classes in school and I know if they’re a self-taught designer, they definitely have no fucking clue what I’m talking about. So, let’s start with a history lesson.

Back in the middle ages, households and kingdoms developed heraldic symbols that were used on shields during battle.

Today, most people ignorantly presume that such crests were done for ego. To announce to the enemy, “I’m King Fancypants! Beware my wrath!”

But no. That was not the reason. The reason was to identify friend from foe in the chaos of battlefields.

Have you ever been part of a medieval conflict with vast numbers of people fighting each other at the same time? Perhaps the closest you have come to such a thing is watching Lord Of The Rings and Braveheart. And believe me, movies do not do it justice. I have been there. I’ve lived it. I have been in the midst of medieval battlefields. I’ve seen it first hand.

I’m not going to bother explaining when and where the Pennsic War took place. I’ll let you figure it out. Look it up. Educate yourself. Some of you will think I’m claiming to be a time traveler. Some of you will presume I’m lying. And that small handful of you are now chucking to yourselves, because you know exactly what I’m talking about. After standing upon the battlefields of Pennsic, with wave after wave of lords and ladies fighting in sword to sword combat, I was finally able to understand the benefits of medieval heraldry for the first time.

In the middle of the fray, it instantaneously becomes crystal clear. Thanks to your shield device, the emblazon allows you to identify your comrades from hundreds of feet away. Even amidst the frenzy and anarchy of such a skirmish, it is easy to instantly spot your allies. There’s Duke Sir Laurlen, 50 feet to the right. There’s Sir Theodric, 30 feet behind me. Ah, I see Calum is still standing – oops. Maybe not.

Most people have never witnessed warfare like that. But imagine being at an amusement park, or a giant concert, surrounded by thousands of people, and having the ability to easily identify your brother or sister when they are 100 feet away. That is what the heraldry of shields was all about. It was far more than simply blocking swords and arrows. Your shield also doubled as a giant billboard to say, “I’m Prince Eric. If we’re on the same side and I’m 200 feet away, please don’t smash me with the catapult!”

What does all of this have to do with book covers?

Just like a medieval shield on the battlefield, you want your book cover to stand out. To be bold. Identifiable.

Unbeknownst to most mundane folks, there are very strict rules regarding color combinations for medieval heraldry. Those who established these rules, and regulated this artistry, are known as “heralds”. Heralds learned that certain combinations of colors provide a more stark contrast than others. Thus, all shield crests are designed to follow these rules. That way, you can spot your King from 500 feet across the battlefield and you can make sure that your archers won’t accidentally shoot him.

What are these sharply contrasting colors used in heraldry?

Well, the hues (known as “tinctures”) of heraldry are divided primarily into 5 colors and 2 metals. (There are also patterns called “furs” but for the sake of brevity and clarity, I’m excluding those from this explanation.)

Not to be confused with “emblazon” which is the actual picture on the shield, the word “blazon” means a way of verbally describing a heraldic coat of arms. The language of blazoning also involves strict rules of vocabulary and arrangement. By adhering to these strict rules, it allows heralds a means to record and reproduce shield devices, based purely on a vocabulary description. For example, the simple blazon, “Sable, a lion rampant or” looks like this: 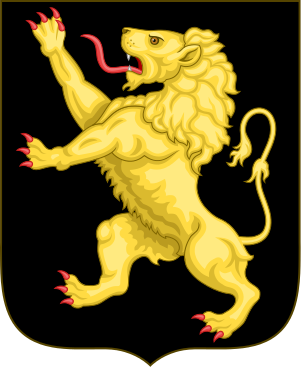 Based upon the specific phrasing of that blazon, that shield will always be drawn the exact same way, by any herald.

Heraldic rules are very sophisticated and I’m not going to turn this into a lesson on heraldic studies. However, there is one very important rule in heraldry I want to get across and that is – you never combine colors with colors or metals with metals.

You always combine a color with a metal.

And that is what you need to remember when you’re designing a book cover. By following that one basic rule of heraldry, titles on your book covers will have the most stark contrast and therefore, they will remain vibrant and easy to read when they are shrunken down into tiny thumbnails or blown up into posters.

Now, for those who don’t believe me, or think this is anachronistic and outdated, because who cares about medieval heraldry, allow me to prove they are idiots.

You personally use medieval heraldry every single day you leave your house. Can you guess where?

Believe it or not, all street signs, in countries all over the world, conform to the heraldic tincture rules established hundreds of years ago. Colors on metals. Metals on colors. Stop signs are gules with argent lettering. Deer crossings are “Or, a deer rampant sable”. The names of streets are azure with argent lettering. Speed limit signs are argent with sable lettering. One way streets are sable signs with argent arrows containing sable lettering. Just like the shields on a medieval battlefield, modern day traffic signs all conform to the tincture rules of heraldry, so you can read them clearly from a far distance.

Thus, I invite you to work at following the rules of medieval heraldry when titling your book covers. You may presume such an idea is contrived and obsolete, when in fact, it’s based upon principals that you use every single day, you just never knew you were doing it.

And, yes, you will notice that all of my books do follow the rules of heraldic color contrasts. My vampire duology was intended to look like tooled leather, so they are not exactly conforming to heraldic tinctures, but there is a slight darkening to black around the gold lettering, to make it stand out more.

I practice what I preach, ladies and gentlemen.

One last note, I have studied art and I made a living as a graphic designer for many years, doing everything from magazine advertisements to sales campaigns for multi-million dollar retail markets. In addition, I do all my own photography and have sold my work in art galleries and photographed Playboy models like Katie Lohmann, Pamela Mars and Gwendolyn Sweet, so I know what the hell I’m doing and I can design my own covers. However, due to my extensive experience as a designer, I can also concede when something is beyond my capabilities. When I require artwork that exceeds my skillset, for example a great illustration or painting, I would not hesitate to hire an artist who is better than me, and art direct the covers.

Most self-published authors should probably follow my example and stop trying to do their own covers. Your book covers make you look like fucking douchebags. Seriously. Most self-published nimrods design book covers that look like they were drawn in fucking crayons by an eight year old. Okay? Readers should definitely judge your book by the cover, because if the writer makes a shitty cover they clearly didn’t create with care, it’s safe to presume the writing will be utter trash too. Please, authors, stop trying to make bookcovers and just hire someone better than you and let them do their job.

On second thought, I take all of that back. I’m sorry. Nevermind. Since those writers clearly don’t really care about the overall quality of what they are publishing, keep those shitty covers. Horrendous covers provide a fair warning to discerning readers they shouldn’t ever bother to read such trash. We’d hate to give readers the impression that these writers actually cared to produce work of quality. Right? That wouldn’t be very noble. At least those crappy covers reflect some honesty. You horrible authors, keep on truckin’ with that tripe.