“What does it matter if something is old? Charles Dickens said any book you haven’t read is a new book. What does it matter whether it’s old?… I don’t understand what this lemming-like dementia is about constantly having new stuff. When was the last time you read the totality of Steinbeck or Faulkner or Katherine Anne Porter or Shirley Jackson? Everybody always wants something new, new, new – and that’s what’s killing life for writers. This dementia for ‘new’ is ridiculous. It turns everybody into a back number… We’re dealing with a more and more illiterate and amnesiac constituency. It’s impossible to get a readership that will follow you, because all they know is what they knew yesterday… And so when I hear this what-are-you-doing-lately thing, or that the Edgeworks books are bringing back all of my older books, I say, ‘Yeah, they’re real old books – like five years old!’ See, I do go off on these things. And if you ask the wrong question, I get real cranky.”
– Harlan Ellison

Michael Ende is an author I wish I had met before he passed away in 1995. A few years after his death, I discovered, apparently, he was extremely unhappy, let’s just say “hated”, the film adaption of his 1979 book, The Neverending Story.

If only I could have told him, that movie is what inspired me to become an author. He may have hated the film and what was done to his book, but for me, his story changed my life. 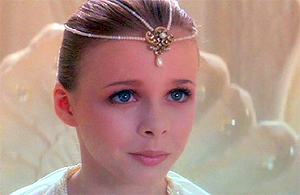 For anyone who has seen the 1984 film starring Tami Stronach (who instantly became the most beautiful girl I had ever seen) and directed by Wolfgang Peterson, I highly recommend you read the novel. Rest assured, I was not the only boy to fall in love with the Childlike Empress that summer. But while she remained only a fantasy to all the other boys, for me, Moon Child became much, much more.

The film only covers the first half of the book. There is far more to the story that the movie never touches upon.

The Neverending Story follows the tale of Bastian Balthazar Bux, a gradeschool boy who steals away in his school attic to read a magical book he has stolen (“borrowed without permission” actually) from a bookstore. If you’ve never seen the film or read the book, I don’t want to reveal anymore than that.

The Neverending Story taught me the magic of storytelling in a way no other book ever has.

See, I firmly believe that all great writers never make up stories. Great writers always hear their stories. The characters speak to you. They talk about their adventures, their hardships, their loves, their sorrows, their joys. Our job is simply to write it down as eloquently and poetically and articulately as we can.

Plenty of people don’t understand that.

Plenty of people don’t believe it.

They think it’s weird or some eccentric delusional trait of creative insanity. Even plenty of fellow writers think it’s weird. (By the way, you writers are the ones who suck really bad.)

That’s fine. I don’t care who believes it or not. My perceptions of life don’t require validation from others.

I live it. I experience it every single day. Stories speak to me. Characters talk to me.

Along with this philosophy, I also firmly believe that as writers, we are destined for our stories. We don’t chose our stories. Stories choose the writer. Characters decide, “We want you to be the one to tell this.”

In that way, all writers have not only a deep personal connection to their tales, but a rather sacred responsibility to them as well. Stories are truly our children, for the souls of tales are entrusted to us, to nurture and protect, until they are ready to change the world.

Readers, I believe, touch the same well of magic. As readers, stories are like falling in love with a magic soul. Hopefully, you understand what I mean. Hopefully, you have experienced that feeling in your own life. Falling in love is one thing, but finding a magic soul, finding one you love to the core of your very being, ah, that’s a whole different experience. At least, I imagine it would be. The magic souls change your life. You could date hundreds of people in your lifetime and still never meet one magic soul.

For me, The Neverending Story was a magic soul of a book. This was a story that touched me in a way I had never experienced before. The power and wonderment of Michael Ende’s words gave my life purpose, gave my future a dream, gave my heart a passion, and gave wings to my hopes.

When you believe in the magic, odd things can start to happen. Serendipity favors the dreamers. These books aren’t merely entertaining or fun. These are books that conjure blizzards and thunderstorms. These are stories that make the lights go out and scare your cat into hissing at the shadows.

These books take on a biblical sanctity. These aren’t books you love. They become books you revere. Sacred texts.

The Neverending Story is holy to me in all the ways a book can be. Within her pages, the Childlike Empress became my one true love and the queen to whom I have sworn my lifelong fealty. Evermore her devoted knight in piety and chivalric obedience, my pen be brandished in eternal servitude to the Golden-Eyed Commander of Wishes.

I don’t know if you would love The Neverending Story as much as I love it. As I said before certain readers are destined to read certain stories. Perhaps, as the character of Carl Conrad Coreander predicts, this book is not for you. When I was 14 years old, I excitedly recommended it to a friend and told him how magical and strange and wondrous it was. I told him how such weird things happened and how I was forced to read by candlelight and how the world felt so different when my journey though Fantastica was done.

And he read it.

Dude, that harshed my bliss.

He didn’t get it.

He didn’t feel it.

For his eyes, there was no magic.

Alas, this book was not for him.

Truth be told, more likely than not, you’ll react the same way my friend did. Chances are, you won’t discover the same magic that I found in The Neverending Story.

Chances are you’ve become too old and cynical to believe in any magic at all.

But if you haven’t…

I am only one in a long line of saviors of Fantastica. We need you. My Empress needs you. You have discovered this book for a reason.

The Nothing grows stronger everyday. Time is running out. Don’t keep us waiting.